These short episodes will be released as we record them, and will try to dig a little deeper, to get at the previously undiscovered, the weird, and perhaps the uncanny. That of course remains to be seen. Our first interviewee is David Johnson, who recently had a show at Beverly called ‘Wig Heavier than a Boot,’ which was a collaboration with poet Philip Matthews. “Wig Heavier than a Boot” was also recently on Lenscratch’s states project highlighting 5 Missouri based Photographers. 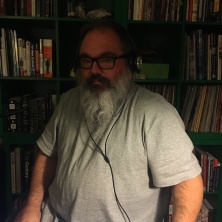 David is a St. Louis-based artist, who received his MFA from Washington University in 2007. He won the Great Rivers Visual Arts Award from the Gateway Foundation which culminated in his 2012 show- institutional etiquette and strange overtones at the contemporary art museum.

His photographs have been exhibited locally and internationally, including: the Contemporary Art Museum, Mildred Lane Kemper Museum, Fort Wayne Museum of Art and National Building Museum in Washington D.C. as well as Candela Books and Gallery, Richmond, VA; La Esquina, Kansas City, MO; Newspace Center for Photography, Portland, and internationally in Denmark and Germany His work can be found in the collection at The Museum of Contemporary Photography in Chicago. Currently, Johnson is a Lecturer at Saint Louis University. David, a Creative Stimulus award-winner himself, recently curated a Creative Stimulus exhibition at the Millstone Gallery called Fractured Tranquility, featuring Brett Williams, William Morris, and Meghan Grubb.

With- David Johnson and Joe Kohlburn