Critical Conversation  ‘Art and Place’ took place September 15, 2015 at Gallery 210.  Topics included neighborhood, institutional context, commercial and community space, cultural context, class, creative process, environment, ‘outsider’ art, the White Cube,  and the unique challenges faced by St. Louis-based artists as well as the various projects of the panelists. We had some great audience-engagement on this one! Take a look. 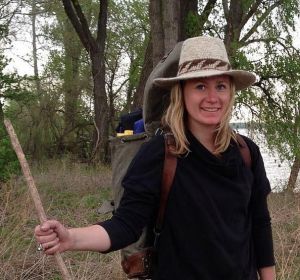 works for the Cherokee Street Business Association and is Executive Director of the Cherokee Street Development League.  She has also worked for local nonprofits Trailnet and Park Central Development, is a graduate of the Regional Arts Commission’s Community Arts Training Institute and is currently pursuing her masters degree in Urban Planning and Real Estate Development at St. Louis University. 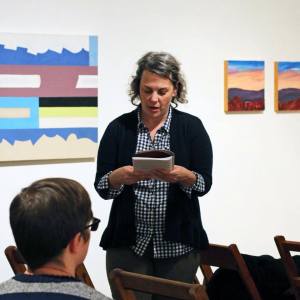 Gina Alvarez– Gina Alvarez is an artist and educator whose practice ranges across media, including printmaking, sculpture, fabric, textiles, drawing, and combinations of these.  She holds a B.A. in studio art from the College of Charleston and an M.F.A. in visual art from Washington University in St. Louis. Gina is a 2012 Creative Stimulus Award Winner, and the current Executive Director of VSA Missouri, a statewide organization promoting access to the arts for people with disabilities. 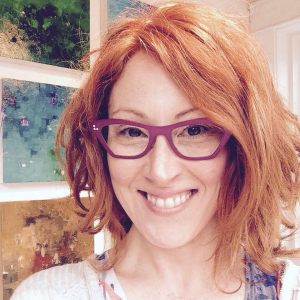 color and light.  Painting on panels that she constructs herself, Malone “builds” her works by creating mesmerizing relationships of form and color from the structured application of paint, which she lays down in overlapping planes and drips, and punctuates with surface “carving” and scratch drawing. While her earlier work was figurative, Malone’s recent work has turned towards the abstract, drawing from her interest in the optical effects of color, digital imagery, and the world around her. Though the paintings are abstract, they hint things known – one might see in them a sunset, trees, water or a garden landscape. She is inspired by the visual effects that color makes when it is revealed by light streaming across objects, and when the sun illuminates the landscape during both sunrise and sunset. The works in this exhibition are from 2014 and 15 and many were created especially for the exhibition at the Sheldon Art Galleries.  Julie Malone was born in Kansas City in 1971. She received a BFA in Studio Art/Painting from Central Missouri State University in 1995 and moved to St. Louis in 1996. She began her career as a digital designer working within the decorative, laminate industry. Her painting and creative drive were impacted in 1999 after the birth of her first child. At that time she moved from the corporate world to pursue her lifelong love of painting. Malone is owner of SOHA Studio and Gallery in South St. Louis. 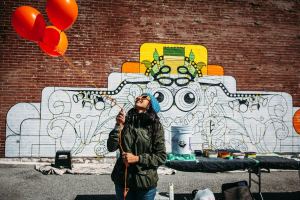 Mallory Nezam– Mallory (Founder and Director of STL Improv Anywhere, Founder and Co-Creator of The Poetree Project and #ChalkedUnarmed) is an artist and cultural producer with expertise in activating public space. She believes this is where people are most affected by artwork – when they least expect it, and where the work is in direct dialogue with everyday life. The art emerges live with the participation or co-creation of the public. Though its form are malleable, a constant current runs through: creating opportunities for transformation, and for deeper engagement with strangers and self. With a background in religious studies, yoga and poetry, she blends play, joy, spirituality, words. She has seen the work disarm, open, and transform. 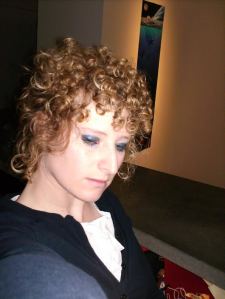 of Fine Arts from Goldsmiths College-University of London in curatorial studies and a Bachelor of Fine Arts from Webster University, St. Louis in 1998. Turkovic has organized exhibitions in Athens, Baku, Los Angeles and New York, in alternative spaces in London and Oxford and in St. Louis at the Contemporary Art Museum, Boots Contemporary Art Space, Ellen Curlee Gallery, Hunt Gallery, Schmidt Contemporary Art and White Flag Projects and is co-curator of an independent project called Isolation Room/Gallery Kit since 2011. Turkovic was co-curator of the recent Mound City exhibition at Laumeier Sculpture Park with new outdoor commissions by Sam Durant, Geoffrey Krawzyck and Marie Watt. Upcoming projects include an indoor exhibition and outdoor commission with New Delhi based artists Raqs Media Collective to open in October 2015 and a solo exhibition with New Delhi based artist Gigi Scaria to open in the spring of 2016 at Laumeier Sculpture Park and a co-curated film series for the Zeitz Center for the Moving Image in Cape Town. She has written for publications such as Art US, Review and St. Louis Magazine.