Thanks to all who came out to the Sheldon last night for the Creative Stimulus Award Exhibiting Artists’ Gallery talk. We heard some great discussion on how Tate Foley, David Johnson, and Mel Watkin each came to their particular subject matter and processes. There was a wonderful underlying theme of discovery, seeking meaning, and making connections.Whether it was Tate’s discussion of the aesthetics of commodity culture via trading cards, tales from ‘Photo Dave’ Johnson about his interaction with the festival-goers at the Kerrville Folk Festival in Central Texas, or a fascinating plunge into Mel’s  growth and influence, which span all the way from arborculture to ancient Roman murals.

At the end of the evening, we announced the winners for 2015 who will be participating in next year’s show- congrats to Meghan Grubb, William Morris, and Brett Williams. In 2016, they will participate in an exhibition curated by a former Creative Stimulus winner (to be determined). Thanks also to all who applied this year, and to everyone who came out to see the award announced. 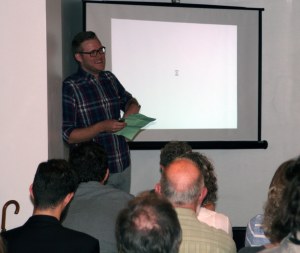 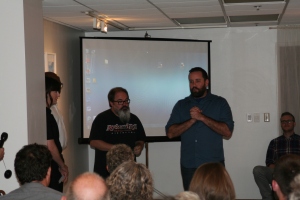